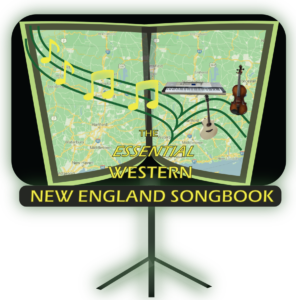 A Production of The New Music Alliance (see below for Links!)

What is The Essential Western New England Songbook?

It’s an anthology of many of the best songs ever written and recorded by artists who have lived in Western New England and whose careers have a significant connection to the area. The Songbook comprises original songs written by or originally recorded by artists who have spent a significant part of their lives in Western New England or who’ve formed their “breakthrough” band while in college in Western New England. A wide variety of music industry professionals from all over Western New England (including DJs, recording studio engineers, music writers, promoters, well-established musicians, and others) have contributed nominations to this ever-growing juried compilation of songs. All genres and any song over 1 year old was eligible. Acceptance was limited to one song per artist.  It’s available to the public in a variety of platforms and through a number of website and social media links. These platforms include Spotify, YouTube, and more.

What is considered Western New England?

It’s the expanded Connecticut River Valley- an area from New Haven, Connecticut (and thereabouts), all the way through the western half of Massachusetts and up to Southern Vermont. This area contains what has been designated as “The Knowledge Corridor.” The Knowledge Corridor is an interstate partnership of economic development, planning, business, tourism, and educational institutions that works to advance the region’s economic growth. Since 2001, the partnership has been recognized by the region’s business and legislative leaders as a vehicle to provide valuable economic and cultural connections to those living in the region.

Why a Western New England Songbook?

This area has many bonds in terms of business, commerce, education, workforce, and the arts. For decades, area musicians have collaborated and formed bands with like-minded musicians across the region. Many have moved back and forth to multiple locations throughout the area.

The Essential Western New England Songbook celebrates this vast and connected music community while showcasing the breadth and scope of exceptional songs written and produced by area artists. It’s also an invaluable resource for anyone who appreciates Western New England’s rich history and culture.

PS:  Like any awards procedure, there will be some deserving songs that weren’t included this year. That’s why each year we’ll be adding additional songs to the Songbook. So if you feel there’s a truly exceptional song missing send us an email at newmusicalliance@gmail.com with the subject “Songbook Nomination” and we’ll consider it for next year.

THE COMPLETE SONGBOOK: All Platforms-Searchable

Do You Want to Meet Some of the Best Musical Artists in all of Western New England? And hear them talk about the songs we’ll be playing by them on YouTube videos? All of whom have been inducted into the “Essential Western New England Songbook”- which is a practical Hall of Fame of W. New England Music. Then join us DEC. 11 @ 7:00 pm for an an ONLINE MUSICAL CELEBRATION!!
Virtual Release/Induction Party: 2022 Essential Western New England Songbook-
https://www.facebook.com/events/3507153172904989
A New Music Alliance Event- Broadcast Production by Northampton Open Media
-A Live Panel of Artists will include Jim Armenti, Tom Guerra, Nerissa Nields, Eric Lee, Ponybird (Jennifer Dauphinais), King Tuff (Kyle Thomas), Steven Peter Rodgers, Tracy Walton, Eddie Seville, Meadows Brothers (Ian Meadows), & Master of Ceremonies Tracy Walton (On Deck Recording Studio, Belle of the Fall). For 90 minutes we’ll be having lots of fun as we watch the videos and talk to the artists about the recording process for their songs and other behind-the-scenes stories.
What is The Essential Western New England Songbook?
“A juried anthology of 200 of the best songs ever written by artists who’ve lived in Western New England and whose careers have a significant connection to the area.” A virtual “Hall of Fame” of original songs from the extended Connecticut River Valley (New Haven CT & thereabouts north through W. & Central Massachusetts and Southern VT). This year 49 additional songs have been inducted to the Songbook to join the 151 previously accepted in 2021.
How to Join the Release Party: ON LINE & Cable TV
It will be broadcast on YouTube Live (LINK: https://www.youtube.com/watch?v=C1ioQhpT_4Y).
It will also be accessible through Facebook and will be broadcast on a variety of public access local cable TV channels in the area (check your local station’s broadcast schedule).