Mark E. Ramone: Assistant Director/Radio Hour DJ
Mark started broadcasting at Eastern Connecticut State University for WECS in August 1990 and played mostly “undiscovered alternative” music with bits of comedy and useless information thrown in. He would invite musicians, politicians, and other people of interest on the show as he honed his interviewing skills. Regular listeners, friends, and fellow DJs would pop in which only added to the conversation and entertainment value of the show. In 1998, he decided to hang up his headphones to spend more time with his family but came back a few summers to do some shows and returned for good in 2010 to pick up where he left off.

Music was always a passion for Mark. It surrounds him while he works, when commuting, doing household chores, and he spends much of his personal time discovering new bands at the clubs. Certain songs seem to mimic his experiences as well as influence his actions. Just as memories and social media posts serve as the transcript to his biography, the songs important to him continually update his Life Soundtrack.

Over the years, his show “Something Different with Mark E. Ramone” provided the community with music rarely heard through commercial channels. He sought out individuals who lacked experience performing in public and local artists struggling to support their dream as well as less popular musicians across the nation that deserved some attention. Mark gets excited each spring when the performers of the SWAN Day CT (Support Women Artists Now) event descend upon the studio and perform live. The show provides the community with an opportunity to listen to something new, refreshing …. Something Different.

In 2020, at the start of the pandemic, the WECS studio was closed for live broadcasts. Soon after, Mark E. was approached by Mark Sherry, the Executive Director of the New Music Alliance, who invited him to join the group of DJs of the weekly, syndicated New Music Alliance Radio Hour.

Joining the New Music Alliance Radio Hour could not have been a better match for Mark and his appreciation for supporting the local music scene. Mark was honored to be added to the group and share his favorite Connecticut bands and artists with listeners all throughout Western New England. 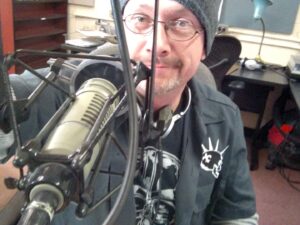 Violet graduated from Bennington College with a B.A. in Music Composition and Performance, and has been kicking around their hometown in the Valley in a wide range of different roles ever since. They are an indie synthpop producer, composer, and performer under the name of The Facades (a solo act despite the name), which is best explained as a psychotheatrical experience told through music and wit. Violet sings, plays keyboards and bass, and produces all their own music. On the side, they’re an actor, social media manager, and ordained minister who has only ever performed gay weddings.

Violet will be working on a variety of projects for the NMA. Utilizing their bevy of many talents they’ll be one of our on-air DJs and helping to produce the New Music Alliance Radio Hour show. They’ll also be involved in our marketing efforts as well as assisting in the completion and maintenance of our website. 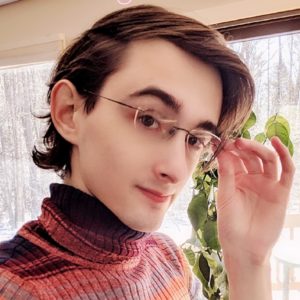